Blake is already back in school, and part of me is bummed that he has no "huge vacation" or major event to tell about, but looking back over the past three months, I've decided that although it may have been a "simple" summer for us....it definitely was not a boring one...

We started off summer vacation with a stormy bang...a camping and rafting trip, scary but memorable!  A few of the simpler things that we really enjoyed this summer included: 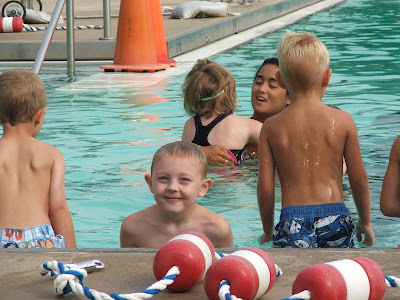 Blake is 6 years old and has grown up with a pool. Until a month ago, he has ALSO grown up with an inflatable swimsuit and water wings to "help" (or hinder) his learning to swim!! Poor child, I just didn't want him to go under and he has never been a floater!! I tried the tough-love approach..."just let go of him, he'll learn"...I watch as he goes straight down, eyes open wide with a look of terror...I scoop him up, blow up the swimsuit and slide on the water wings---happy floaty kid!!
In kindergarten they had a Beach Day...they could wear their swim attire and would have fun with water...he begged me not to make him go to school that day, "Mom, I don't want the other kids to know that i still wear water wings!" I explained that there was no actual beach, or deep water, and that he didn't need his wings...he went and had a blast. Maybe that was his incentive to learn to swim without them. PEER PRESSURE can be a good thing too!
One day he just asked me to show him how to doggy-paddle again, I did, he immediately learned, and has been a little fish ever since! He jumps off the deck into the pool, goes underwater, swims around, does somersaults, tricks, and can float.  YEAH!

Since swimming had become one of Blake's favorite activities, I signed him up for swim lessons.  They were very affordable and taught him some new strokes, how to tread water, and life-float in case of emergency.  The lessons were first thing in the morning and lasted 35 minutes, 4 days a week for two weeks.   I'm glad we did the session, but wouldn't say he learned that much.  I think I could have taught him what he learned from his instructor, but since he had a great time, it was worth it! 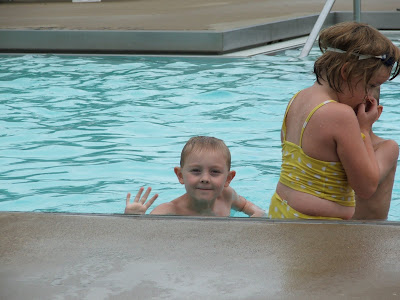 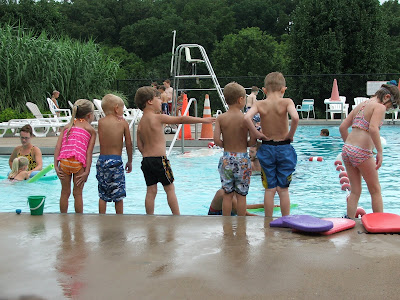 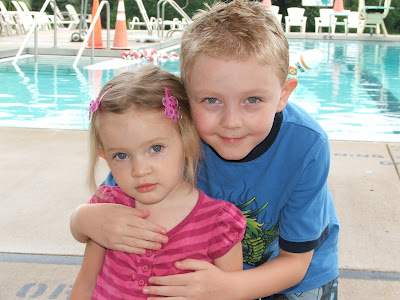 Posted by The Sullivan's at 6:43 AM No comments:

I just wrote the post about being nervous for Blake and now I am feeling better...

We went to meet his teacher tonight and she seemed really nice.  I've heard great things about her!  School supply drop-off was easy and non-eventful, EXCEPT...Blake has one of his best friends in his class now!  His buddy, Kanin got switched at the last minute to Mrs. Vice!  Now, I have no worries about him knowing kids in his class, who he will sit by at lunch, or play with at recess...he will have Kanin!  I also have NO concern that it might keep them from making "new" friends, they are both friendly and love to play with everyone...it's going to be a great first grade!!!


Isn't it supposed to be the kid that gets anxious before school starts?  New classroom, new teacher, new kids, new schedule...NO PROBLEM...for Blake!  I, on the other hand, am a complete wreck.  This is the first year that he'll be in school ALL day long.  I am rarely ever away from him, and although there are many times throughout a typical day, that I may pray for a break from him, I am still nervous about him being gone so much!  Silly, I know, but I also wonder...Will he know any of the other kids in his class, who will he sit by at lunch, will he be a good listener, on and on...

When I ask Blake if he is excited to go back to school, he says, "Sure, why wouldn't I be?"  When I ask him if he is nervous, he says, "No, why would I be?"  And here I am, all excited to help him pick out his school supplies and realize that I care WAY more than he does!!  The only request he had was, "Can I pick out a STAR WARS folder?"  And, since that was all he really cared about...I drove to a far-away Target store just to find them!  Is this a boy thing?  I can remember being all excited to pick out my own stuff, go school shopping and all!!  Oh well, maybe Taylor will be excited with me when it's time for her to go to school!!

On the other hand...his "lack of excitement" during shopping, probably saved us a bundle...since he didn't mind, he is using a three year old backpack (from the previous TOY STORY movie-lol!), was happy to buy all sale items for his supplies ( 25 cent crayons etc..) , and even spent his allowance to buy the most expensive item...a stainless water bottle!!!  Maybe I shouldn't be complaining!  LOL!!!
Posted by The Sullivan's at 6:01 PM No comments:

Blake's hair grows so fast and I have always been the one to cut (or butcher) it. lol!  Billy begs me to take him to a barber, but it's expensive and I'd have to take him every three weeks...that's alot of time and money that is needed to be spent elsewhere, so, Blake has had a "bowl" cut most of his life! Personally, I love his little "surfer" look.

I knew that the day was coming for Billy to either "get out the clippers" or take him to a salon. He has been threatening to give Blake a buzz cut for over a year, Blake and I have both refused...but...this time, Blake agreed that he could do it, as long as he didn't make it too short...he wants to have spikey hair like his friends, Kanin and Hayden !  I still tried to fight it, but they say, "oh, it'll always grow back". SO...

We prepare...onto the deck we move a stool for him to sit, Billy gets the clippers plugged in, and I get the video camera rolling. This ends up a video that I wish I could delete! All you can hear, as Billy glides the clippers over what seems like Blake's almost-bald-now head, is me saying, "Oh no, what happened, oh no, I thought you put a guard on the clippers!" Poor kid sits there wondering what could be so bad...I turn off the camera because I doubt anyone is going to want to relive the moment that Blake's Mommy freaked out about what he looked like without hair!!  Turns out...his hair is WAY short, but not that bad, because within a few days, he can spike it into what we call a "faux-hawk"...he is really happy with his new do. He thinks he looks "cool" like his buddies now!

Several weeks later...all is well, but I must admit, there is a tiny part of me that is sad... although Billy, Blake, and virtually everyone that got to hear me rant, promised "Don't worry, it'll grow back"...the truth is, it is probably the end of the kiddie "bowl" era...and after seeing him go from looking like a little boy to a big kid...I guess I'll just have to accept it...he isn't going to be little forever!