So...Blake has been coming home from school with one glove on and one glove off for the last week or two.  I asked him what he was doing and where his other glove was, but he just said that he likes to wear "just one"...I didn't think much of it.

Blake loves to write stories and draw comics, I noticed that one of his alien characters that he created had one glove and sunglasses.  He called him Mikel.  He works for the "BAD academy"...you can see where this is going, I'm thinking a tribute to M.J.! Again, I didn't think much of it.

Today, a comment was left on his daily behavior sheet by his teacher.  It said,  "Blake has been talkative and his glove & sunglasses are a distraction in class.  He has started a trend with ALL of the boys now."     OMGoodness...he wears them in class?!?!?  Well, he won't anymore!  I am upset with him, but had to laugh (to myself, of course)...so...if your child is one-gloving it, you can blame Blake!  lol!!! 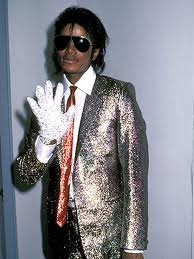 Posted by The Sullivan's at 2:16 PM No comments:

Blake loves cub scouts and has been looking forward to the famous Pinewood Derby Race!  I was happy that it was a project that he and his Dad could do together. 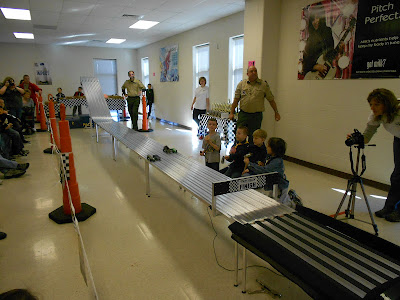 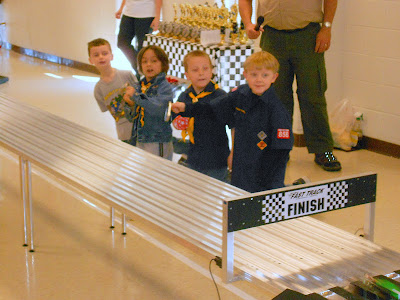 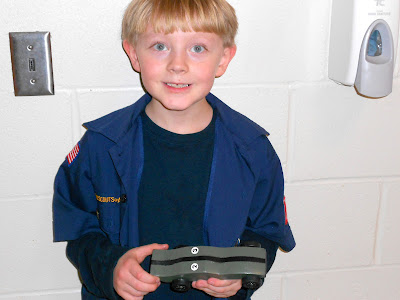 Posted by The Sullivan's at 3:24 PM No comments:

Thank you for making me go

This week is another stressfully "stretched" week.  A week that has too many activities and too few days together...that's why when I noticed my little note that said, "PTO literacy night 7pm" on my calendar, I literally looked away and pretended not to see it.  It wasn't something that I "had" to go to, so I was planning on skipping it.  Blake got home from school and was so excited to attend the kids trivia at the literacy night...really?!?!?!?  Ugh...I tried to talk him out of it, but his replies were, "Mom...don't you want me to grow in my literacy skills, learn about school stuff and books, and win prizes cuz I already know alot at the trivia game?"  Again...ugh.  Fine, we will go.  As Billy walked in the door, Blake and I headed out.

We got to school and the kids were taken to a room to play trivia, while us parents gathered to chat with teachers, principals, and reading specialists.  I have to say, not many showed up, so when they broke us down into groups by our child's grade level, it was a nice cozy conversation.  It was really nice to talk one-on-one with our assistant principal and the reading specialist...we got to talk and discuss how important what us parents do at home is and what an impact reading has on our children.  They both agreed that continuing to read to our 2nd graders is super important.  I must admit, I have slacked in that since Blake loves to read, reads way more than the 30 minutes a day, and doesn't "need" me to read to him.  Billy tucks him in, they read out of his bible, then leaves him to read to himself.   He is happy to read to himself and happily falls asleep.  I read to Taylor at night, but am going to ask Blake if he'd like to hear her book too, before he goes up to bed.  Our assistant principal has a 6th grader who still asks her to read to her...she loves it and I can see why.

I didn't want to go to this meeting, but thanked Blake for making me go, I got so much out of it.  I am going to make more of an effort to stay involved in the little things, even if he doesn't need me...I can still do it with him!
Posted by The Sullivan's at 2:27 PM No comments:

Reading for life- It takes time

This is a story for "inspiration" that I got at our school's literacy meeting....why we need to build on language EVERYDAY!!! -Mrs. Kelly Smith


Reading for Life
"Reading is the greatest single effort that the human mind undertakes, and one must do it as a child."
-John Steinbeck
So, THIS MAN decides to plant a special type of bamboo.  He goes to his yard and measures an area 20 ft by 20 ft.  Over several days, he digs down two feet to break up the clay earth, sifts the dirt, adds manure to fertilize the soil, carefully plants the bamboo, covers it, and marks off the boundaries.  Every morning, before breakfast, he carries water from the stream to his plot.  He weeds and waters and waits. Every day.
After a year, no shoots have appeared. A neighbor who has observed the man's daily efforts stops as the man worked away and asks, "Why are you working so hard for nothing?"
"It takes time," the man replies.
The next year, the man does exactly the same thing.  Every day, he walks to the stream at dawn, carries the water, carefully soaks and weeks his plot. At the end of that year, still nothing has broken the surface. The same neighbor walks by, "Why are you wasting your time?" he asks.  "I have some good seeds I'd give you."
"It takes time,"the man replies.
The third year, the man builds a small fence around the plot to keep out animals.  Each morning he walks to the stream and carries water to his plot. He continues to tend it with care. At the end  of the third year, when still no shoots have appeared, his neighbor asks, "Are you crazy? Why do you keep doing that?"
"It takes time," the man replies.
Three weeks later, the first small, green shoots push through the soil.  They grow. And grow, And grow! Six weeks later, the man's bamboo towers over 60 feet high.
﻿It takes time.  This phrase has little credence in our fast-forward, sound-bite world, where a moment's silence on TV is referred to as "dead air" and multitasking is a way of life.  But during those years when it seemed the bamboo was doing nothing, critically important things were happening:  The roots of the bamboo were spreading, branching, thickening, developing the strength and vigor to support the bamboo's future phenomenal growth and size.  Only with watering and careful nurturing could the plant develop the root structure to support the towering stalks of bamboo.  Every bit of the man's effort, every ounce of water, was needed.
For your child to become a great reader, his/her mind needs similar watering.  You water your child with words-talking and reading.  It doesn't take a lot of time, but you must never forget to water, a little bit every day, day after day, week after week, year after year.
-taken from 1st pages of the book:  7 Keys to Comprehend by Susan Zimmermann
Posted by The Sullivan's at 2:26 PM No comments:

Today, after church, we were eating our lunch at the table and Blake asks, "Mom, wanna know my favorite Martin Luther King Jr. quote?"  It is, "Hate cannot drive out hate: only love can do that."  Then he says, "Someday when I am a preacher, I'm gonna find the right time to talk about that very subject and read that quote"...so proud of my little guy!  I love the way he says this stuff so "matter-of-factly" , I told him that if he told his Dad this, it may cause him to die and go to heaven right then!!  Billy would be sooo proud if Blake took that road for a career!  Billy just said that he didn't have to wait to "become" a preacher, that he already was one, just by living a life through Christ, Blake said, "oh yeah, cool"!
Posted by The Sullivan's at 7:29 PM No comments:

It's still January and cold, but that didn't stop us from having some fun! We played in the snow and spent a lot of time watching our new family addition, Finney (the grumpy fish). 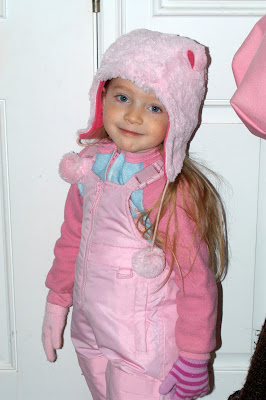 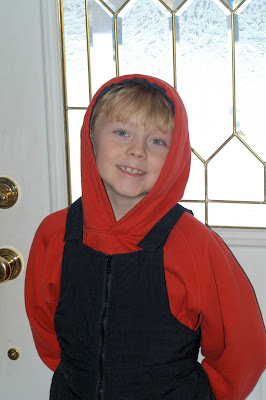 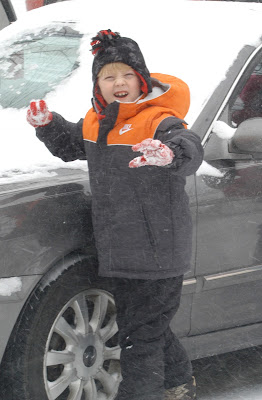 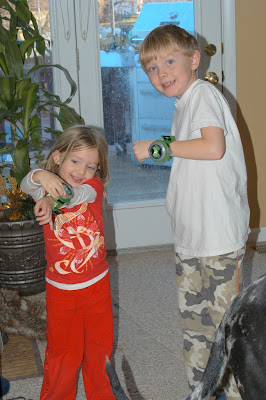 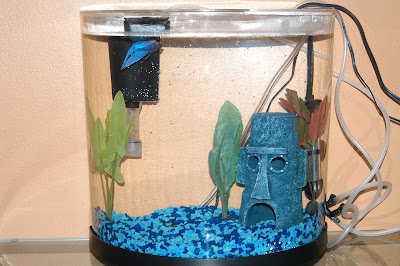 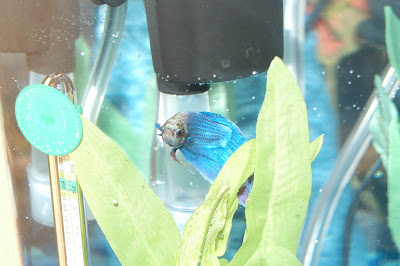 Posted by The Sullivan's at 6:55 PM No comments:

After hanging out at the library, waiting for Max's grand appearance...the room opened up, all the kids and parents filed in and sat on the floor to listen to a famous Max & Ruby book...Bunnycakes!!!  After the story, a craft room was opened up and Max came through the door to visit.


We had a wonderful day together and will see what else the library will hold for us!

Posted by The Sullivan's at 1:30 AM No comments:

Taylor has LOVED Max & Ruby since the very first time she saw them on TV.  She had a Max and Ruby Birthday Tea Party last year...they are her very favorite characters!


I signed my little sweetie up for a "Meet Max" at the library.  There were waiting lists for this event all over town, I finally found one open...I knew we had to go! It ended up that I had to get Blake out of school early, just so we could go...sshhhh!  Taylor was so excited, all the way there, she was asking, "Mommy, are we there yet?"

Labels: Fun to do, Memories, Taylor

Winter Trip to the Zoo

April and I decided to take the kiddos to the zoo...it's January but oh well! It turned out to be a great day, a bit traumatic...as the laughing hyena was fed a cute white bunny, right in front of us :/  The image of that was quickly turned to happy thoughts of elephants, hippos, penguins, and prairie dogs! 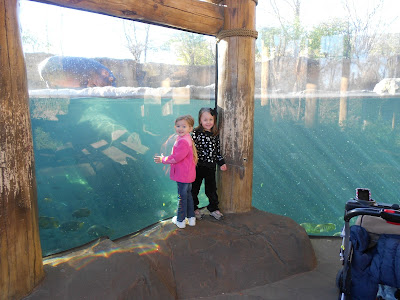 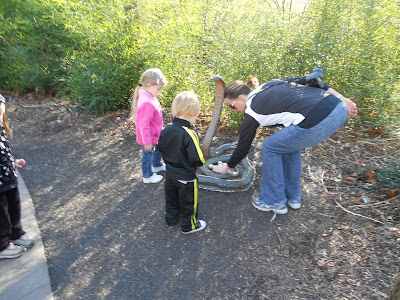 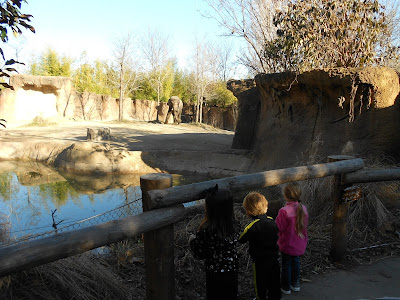 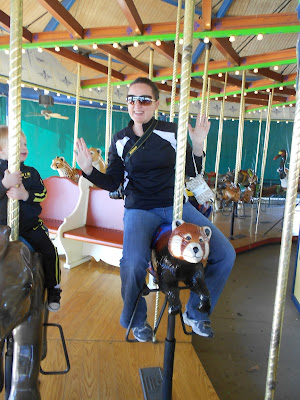 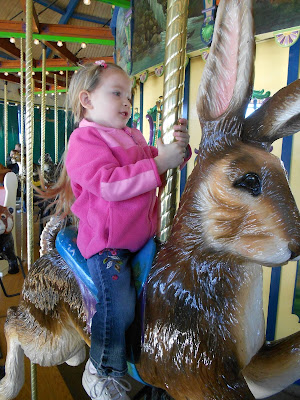 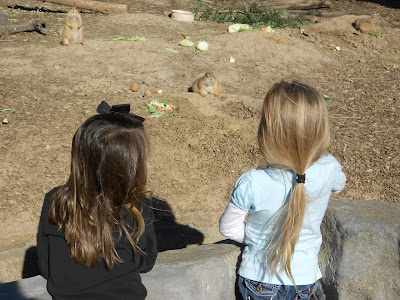 Posted by The Sullivan's at 6:48 PM No comments:

Labels: Fun to do, Memories, winter

You are special because...

In Blake's classroom, for his birthday, his friends wrote little notes to him.  Some of them were super sweet, others were hilarious.... 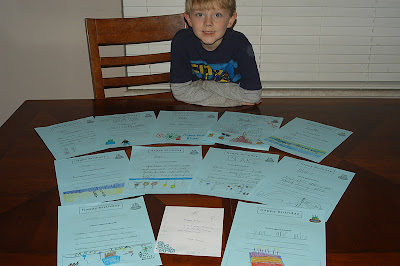 They all started out with:
HAPPY BIRTHDAY, BLAKE
You are special because...
"you are funny and cool"
"you always help me and I'm your best friend, Tyler"
"you have a smart brain and you are nice everytime I see you.  You are funny"
"you are funny, cool, and fun"
"you are smart"
"you are awesome and you are cool"
"you are nice"
"you are very funny"
"your comics are awesome"
"it is a verey speshl day, it is your day to shine, have meney wishis! From Sarah"
"Nowen else is exactlee like you, love Sophie. Have a wonderful day Blake"
"You are unique in your own way, for instanse, you like baseball, are nice and smart and you like video games"
These are adorable birthday gifts for Blake, such a thoughtful thing for the teacher to let the kids do!

Blake is 8!! I can't believe that another year has passed.  We didn't do a birthday party for his this year, I thought he might be bummed, but he understood.  Aunt Sissy came over on her day off to give him her presents...she always gets him the best stuff!  She gave him two lego sets and money!  He's one happy bday boy!

Taylor and I made him his favorite chocolate cake from scratch (thanks for this recipe Mom) and decorated it.  We still decorated the dining room with streamers so that when he wakes up, he will be suprised. 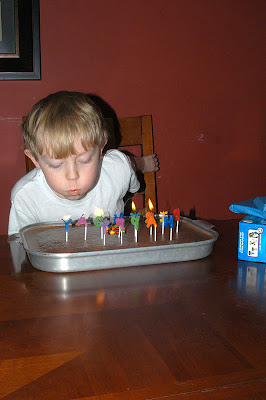 This whole year has flown by...it seems like Blake just turned 7, but here it is again, another birthday...he's 8 now!!

Over the lst year he has...

Posted by The Sullivan's at 5:51 AM No comments: