Bringing in the New Year

We used to go out and do the whole party until midnight or often, I would photograph a wedding and Billy would assist so that we'd get to bring in the new year together, while we celebrated with a new couple.  Now, with the kids involved, we love to just put out a spread of appetizers and snack food, gather a few party supplies and "try" to stay awake to at least watch the ball drop in New York, before passing out next to the kids, who had given up hours ago!!!

I know that sounds like we're duds...but when Blake was almost one year old, my sister came to babysit so that Billy and I could go out.  Around 10:30, after several calls home to check on them, we headed for home.  They were both awake and still playing, we packed up food and drinks and headed home to bring in the new year together, as a family...and it's been that way ever since!!!
Posted by The Sullivan's at 8:22 PM No comments:

Over Christmas I got strep throat.  For more than a week, I had been nursing Taylor back to health, she recovered but not without a trip to the doc and $65 in topical antibiotics.  Her rash may have been caused by strep bacteria...which I guess I got!!

I had so much planned, people to see, and food to eat, but NO...after a visit to the Walgreen's clinic, antibiotics, and a sore-throat remedy that sounds disgusting...I'm starting to feel better.

The sore throat remedy as listed on my treatment plan:


Mix equal parts of liquid (children's) Benadryl
and liquid Maalox or Mylanta antacid
plus a few drops of anbesol-
swish/gargle every 2-3 hrs as needed
Sounds terrible, but totally helped.  I must have been hurting to try something so weird, but it works!!
Posted by The Sullivan's at 7:09 PM 1 comment:

packing away the memories

Well....today is the day....that I get sad.  I am packing away the Christmas stuff.  My home feels warm, inviting, decorated cheerfully, and when I pack up all the Christmas, it feels empty and plain.  PLUS, the excitement and anticipation of the season is over... I guess it's time to start thinking about a happy New Year!!!

Earlier in the month, I wrote about  how we keep Christmas memories , we write about special moments/memories on a card to be put with this years new ornament, pack it away to read next year when we decorate the tree.  It might just be a sentence or a few words...but it ALWAYS brings back memories!

This year, Blake wrote a letter to Mom and Dad while in school.  It says:


"Dear Mom and Dad.
Santa may give you lots of Christmas presents, but I will give you my heart.
Love, Blake"
AWWwwww!!  So, since he didn't get a Hallmark special ornament this year (part of the Christmas cut-backs! LOL!)  I let him decorate an envelope, enclose his letter, his 2010 memory card, and his hand-painted ornament.  We will get to unpack it next year!!  YAY!! 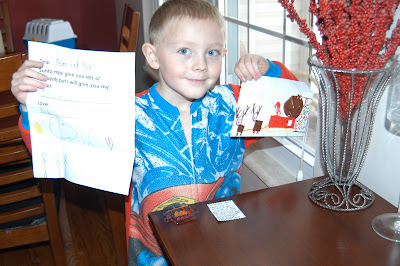 Taylor got to put her memory card in her 2010 ornament too!! 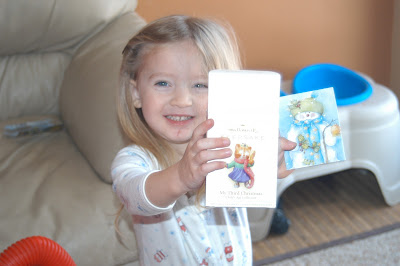 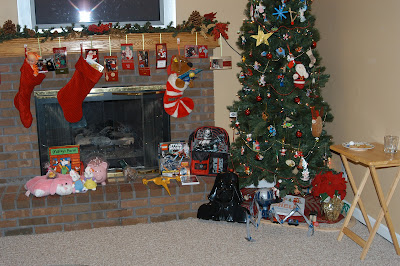 On Christmas morning, Blake wakes us up to tell us that it's time!!  I usually jump up, run to the video camera, hit record and then let him out of the bedroom...lol!  But this time, he slept upstairs with Aunt Sissy, so I literally didn't sleep at all, because I was afraid I would miss him running in to see if Santa had come yet.  So, somewhere between 5-6am I woke up, heard my sister up, we started coffee and it wasn't long before Blake came down too!  I had him go in my bedroom and wake Taylor too.  He tried, but she ran out and then fell back asleep on Daddy's lap. 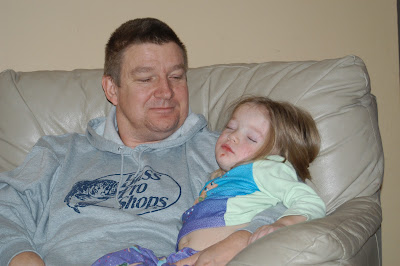 The kids must have been good for Santa.  They both got everything on their lists.  Blake ran out to find Star Wars stuff!  The wii game, Legos, ships, and figures.  He was a happy camper! 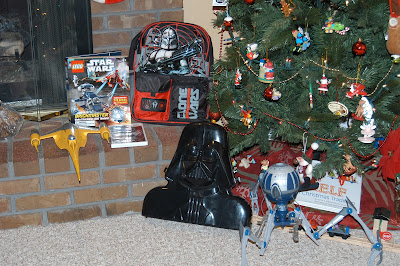 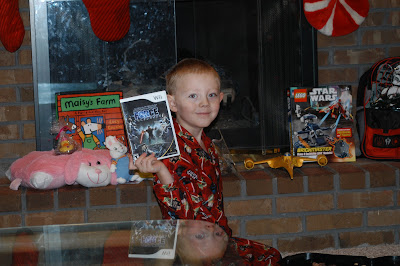 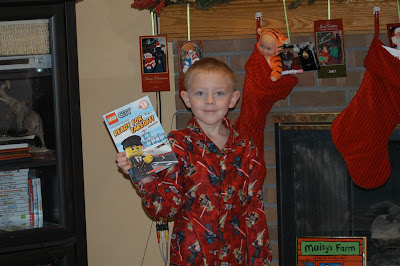 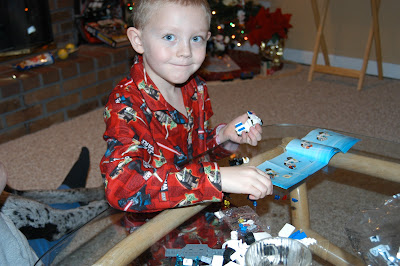 Finally, Taylor wakes up and realizes that Santa has come for her too!!  He brought her a pillow pet, Max and Ruby dolls, and a rubber ducky....everything on her list!  She also got a pink princess piggy bank and a fold-out Maisy farm book! 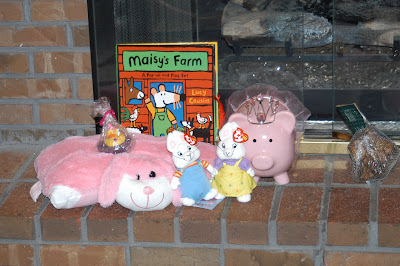 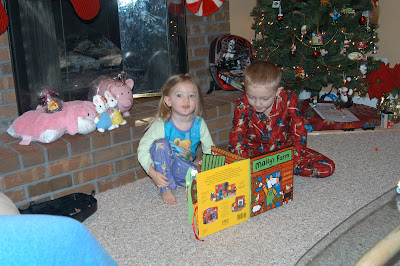 Sophie got a big knuckle bone, some treats, and a new toy in her stocking! She'd rather just cuddle with Aunt Sissy! 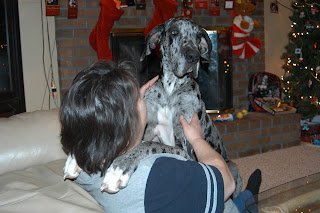 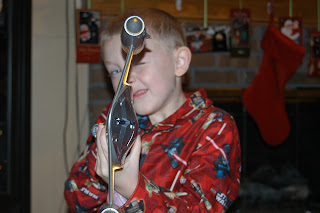 We relaxed, fixed an awesome steak dinner with baked sweet potatoes, caramalized brussel sprouts, and fresh baked yeasty dinner rolls.  Even though I was feeling yucky...there was NO way to NOT enjoy this day!  Thanks to God, my family, and too many blessings to count!
Posted by The Sullivan's at 10:36 AM 1 comment:

Finally, after torturing the kids for hours, we began the gift-opening with a prayer led by Blake to thank God for everything he has blessed us with.  He did an awesome job, I'll post a video when I figure out how to do it!  Blake asked for Taylor to go first...he's so thoughtful.  He even helped her open hers.  She got a mobiGo from Aunt Sissy!!!  She has tried to play with Blake's Nintendo DS for about a year now and we always take it away from her, so now she has her own pink "DS"...thanks Aunt Sissy!!  She loves it and is really good at it already!! 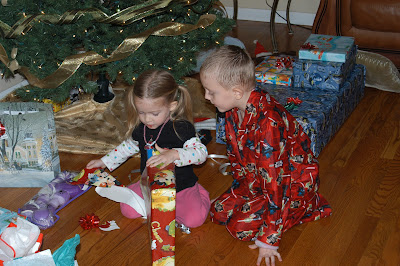 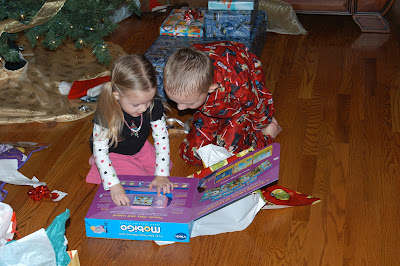 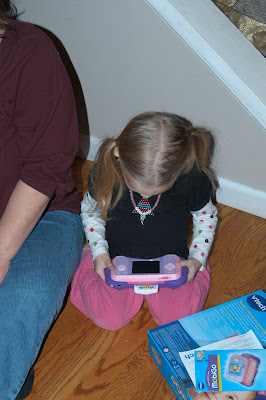 Next, was Blake's turn.  And of course, he wanted to open Aunt Sissy's HUGE present...little did he know that it was a HUGE joke put on by mean ol' Aunt Sissy herself!  The kids KNOW that Aunt Sissy brings the greatest gifts ever, so as soon as she walked through the door today, they have been begging to open presents.  Blake has been wanting a Lego City set for months now and couldn't wait to see what was in that BIG box...well, Diana (aka Aunt Sissy) packed a tiny 3inch Lego/McDonalds toy inside that huge box and was gonna wait for him to be bummed before treking out to her trunk to bring in the "real" present.  Mean huh?  I told her that he would like anything, big or small that she got him and the joke wouldn't work...she thought he'd cry and then she started to worry about it and even started to cry a bit for him while he opened it....AND...he was happy with a tiny toy!!!!!!!!!!!!  I won!!!!!!!!!!!  He was happy enough that we even almost forgot to go out and get him the real present....at the end, she gave him a HUGE Lego City Set and he was happy as he could be!!! 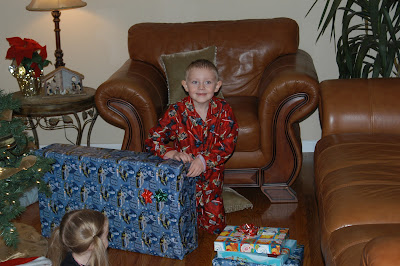 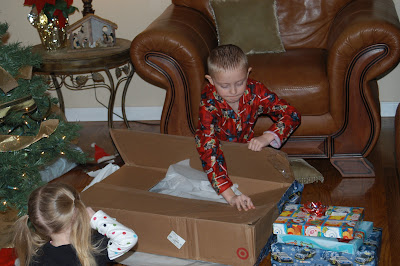 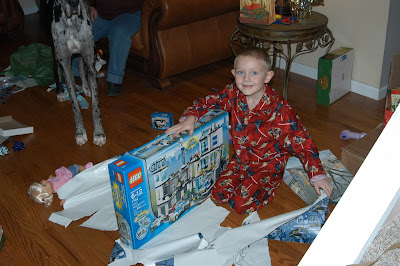 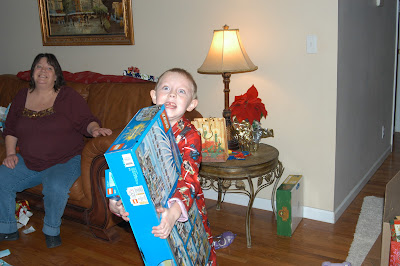 Taylor got a baby that NEVER stops talking and laughing, again, THANKS AUNT SISSY! 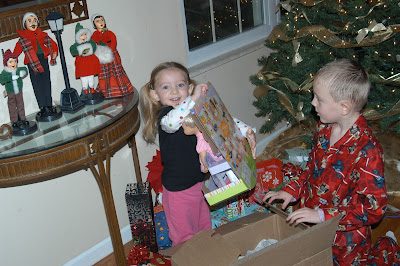 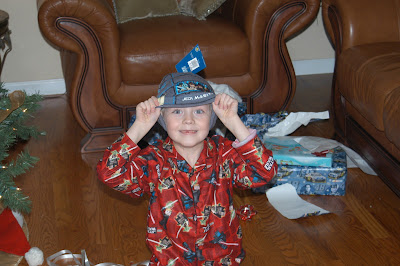 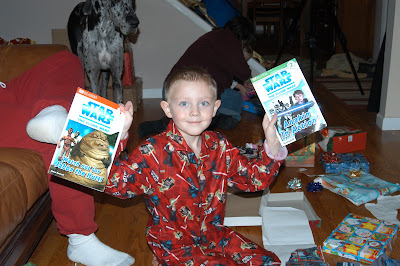 Each year I let the kids pick a gift to give to the other...
I also let the kids pick a gift to give to Aunt Sissy.  This year they got her a personalized ornament and a pair of slippers.  Poor aunt Sissy...us adults have agreed to NOT give gifts...that just being together is gift enough, but this year, Diana cheated!!  She gave me a new GPS system for my truck since mine got stolen!!!  She is the most thoughtful person in the world, I am ever so blessed to have her as my sister (and not because she gives me more stuff than I could ever deserve) but because she is the best sister EVER!  I respect her wishes of NOT posting pics of her, otherwise here is where you would see her shining smile!!!  LOL!!

Billy got me an mp3 to use at the gym and I got him the promise of God cd set.  Aunt Sissy took care of Sophie too with a stocking full of goodies.  Though we were blessed with gifts to share with one another...the bestest ever gift in the whole wide world is a family to share good times with!  I am truly blessed!
Posted by The Sullivan's at 6:14 PM No comments:

Three years ago, I found the Fort Zumwalt Celebration of Lights.  The park was near my Mother's house, where she was in hopice care at the end of her battle with cancer.  The many many trips to her house to care for her were sometimes unbearable, but one dark night, the street looked different.  Brighter.  Full of cheer.  It was the lighting of the park.  WOW!!  It was lit the same night she passed, and I can remember staring at the entrance as we would drive by, with a tiny bit of guilt, at the thought that I would love to take Blake through it.  How could I think of such a thing when my Mom is dying?  Well, we didn't go that night of course, and even two weeks later, I didn't want to drive back down her road to the park, but before Christmas, we packed into the car and drove through.  We loved it!  I thought of her, because I know she would have loved it!

Each and every year, we make a family night of driving throught the Fort Zumwalt Christmas Light display.  We put on our pajamas, bring popcorn, and drinks.  We blast Christmas music and I let the kids out of their seatbelts to move around....ssshhhhhh....i make them hurry and buckle back before we get to the pay station, and someone might catch them! lol!!

Taylor love the Rudolph displays, and Blake loved ALL of them! 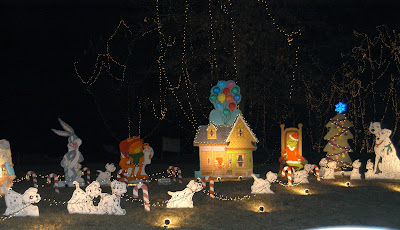 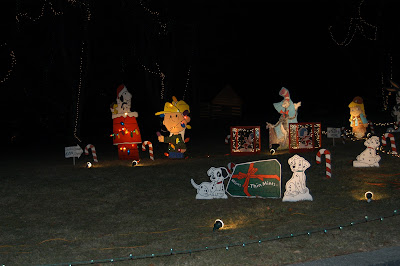 Christmas eve day, Aunt Sissy arrived bearing all kinds of goodies...games for the kids, presents, and food.  The kids, and us, wait for her to get here, so we can start the festivities.  The kids got to open a couple gifts early in the day.  (mostly because they were items that were needed that day).  Blake got Star War Legos pajamas, and Taylor got a Maisy's Christmas Eve book.  Blake was happy and Taylor ran away saying, "Let's read it right now!" 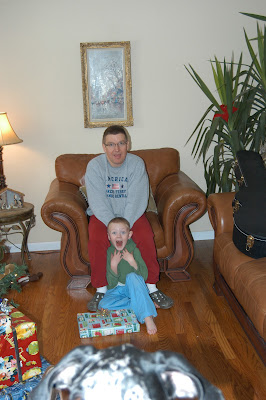 The second gifts they got to open was snow boots for Blake and a fishing pole for Taylor.  We were all dressed to go play in the snow and Blake had no boots, he started to put on his tennys and Daddy asked him to open the present that he got him....cool camo boots.  YAY!!  Daddy got Taylor a princess light-up fishing pole.  I have to say, I had doubts...seriously...a fishing pole.  But she loved it!  She has carried it around everywhere...GO DADDY!! 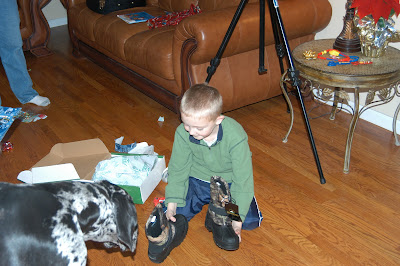 Aunt Sissy brought Nick Jr. Wii FIT!!  It was a huge hit for Taylor.  She has been begging to play wii, but there are really no games that she is quite ready for....but leave it to Aunt Sissy to set her up!!  If it weren't for good ol' Aunt Sissy, presents wouldn't have been near this big! 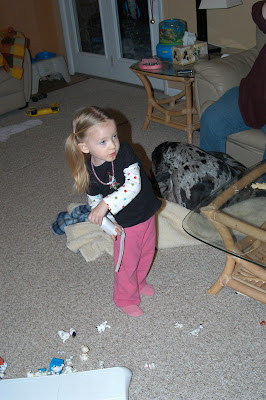 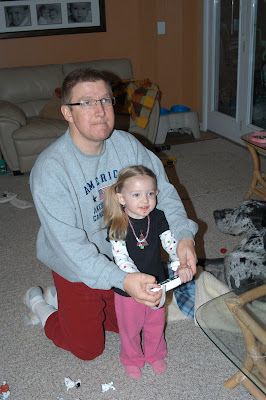